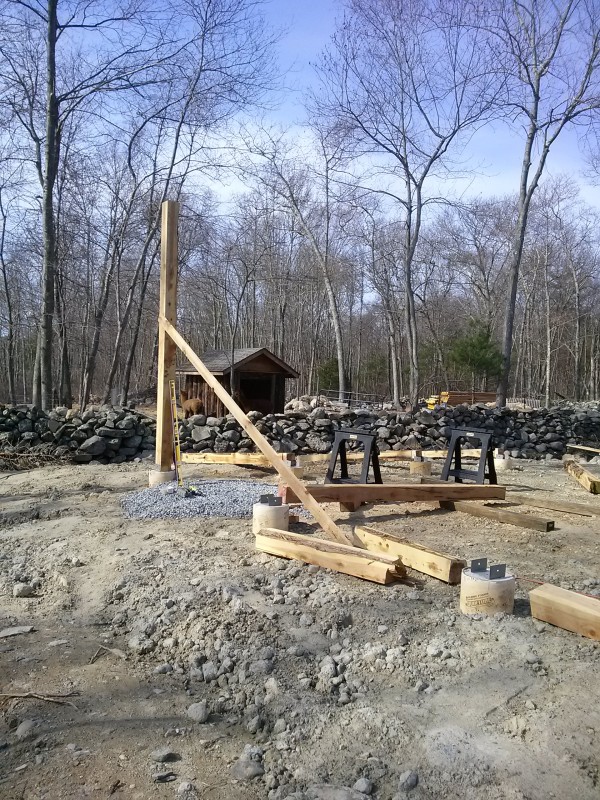 The 12 sono-tubes have been set and back filled and the first cedar post went up today. There’s still much to do yet I have to say, looking up at this 10 foot piece of lumber
sure made me a smile! I’ll be posting more of our barn raising as progress continues! 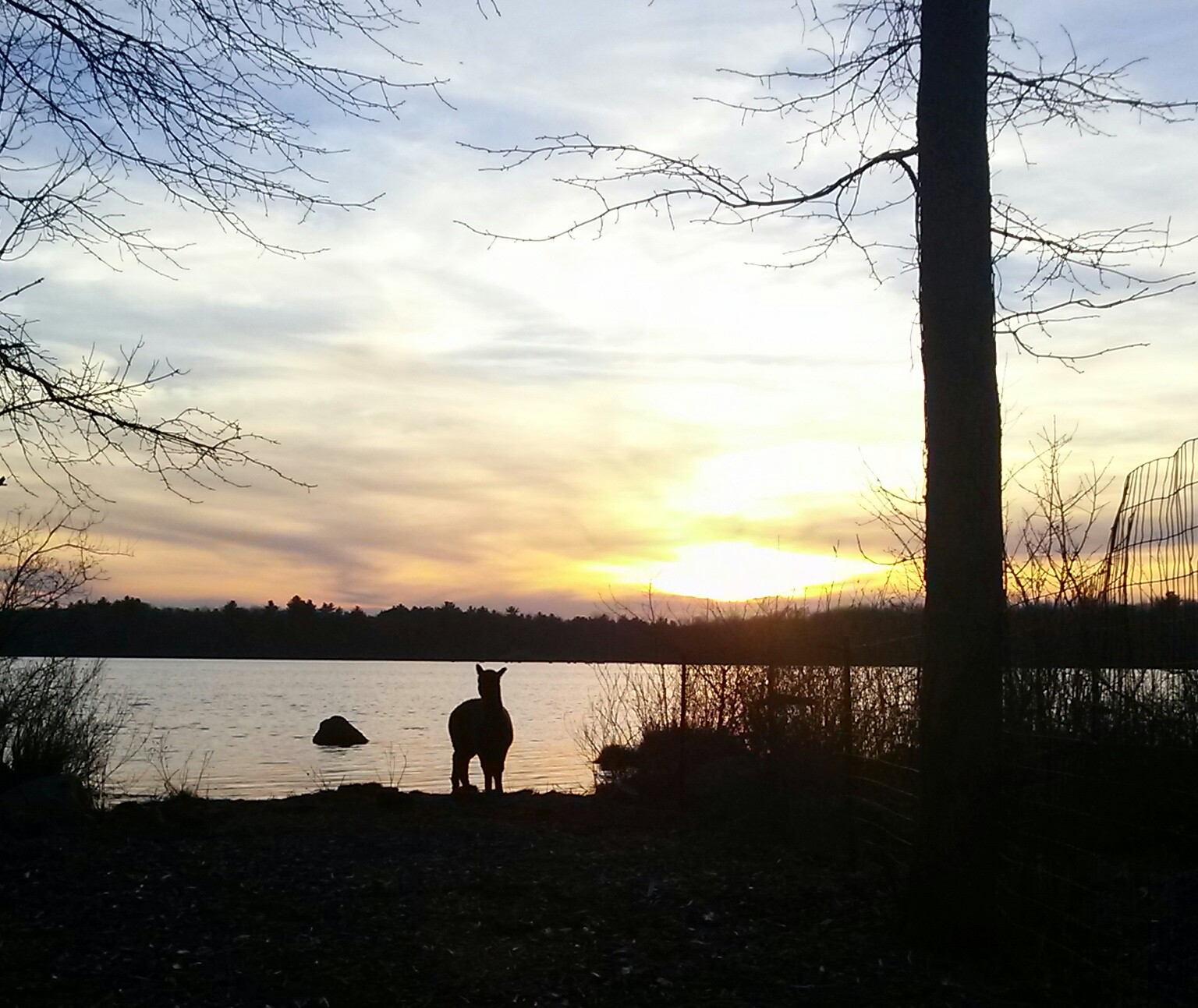 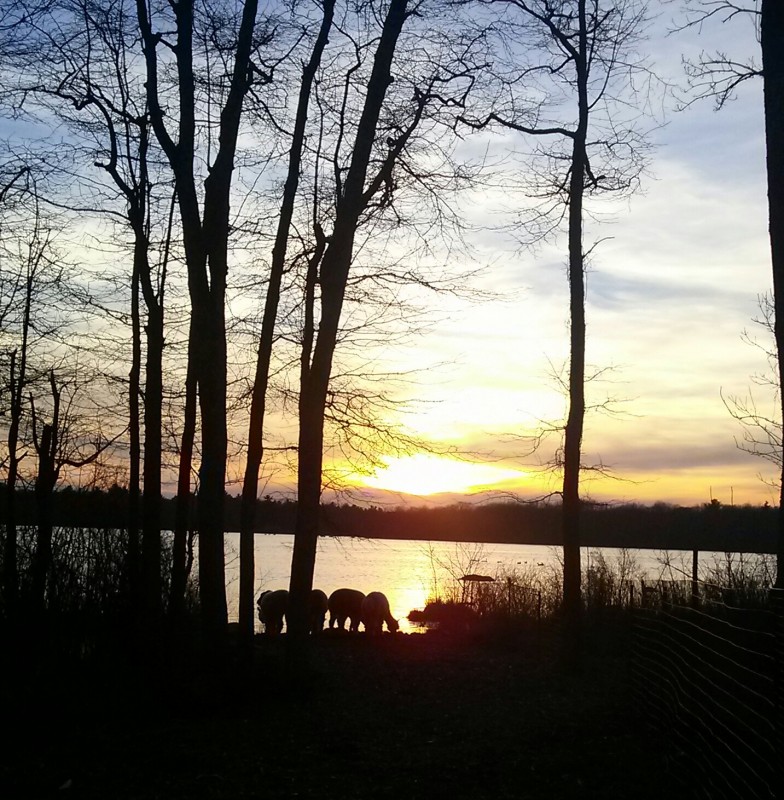 The girls took a stroll down to the water this evening. The water was still and the geese were flying.
I’m looking forward to getting my Nikon fixed so I can get some better shots, although these are not bad for a cell phone.

You may remember about a month ago we took in an old male alpaca that somehow found his way into a slaughter house with some goats and sheep.  Being older, slower and a reddish/brown color, we named him RUSTY.  The first few day he was here he was rather lethargic.  When introduced to our other two (rather rambunctious)  males, he seemed to adjust.  Franklin, our resident BRAT, still tries to intimidate him but he holds his own.  Now that the weather is getting warmer , although as I write this, I see a dusting of snow/sleet on the grass, Rusty ventures out of the barn more often.   We do not own a chip reader but will borrow one at sheering time to see if old Rusty is chipped and perhaps we can get some information on him.  He’s sweet and halter trained (unlike the BRAT) so someone has worked with him.  A little ‘Rust’ adds character to our farm.

Mira and Elise stopped by this morning to walk Rusty and feed the boys.  I enjoyed having them and giving them a tour of our farm. 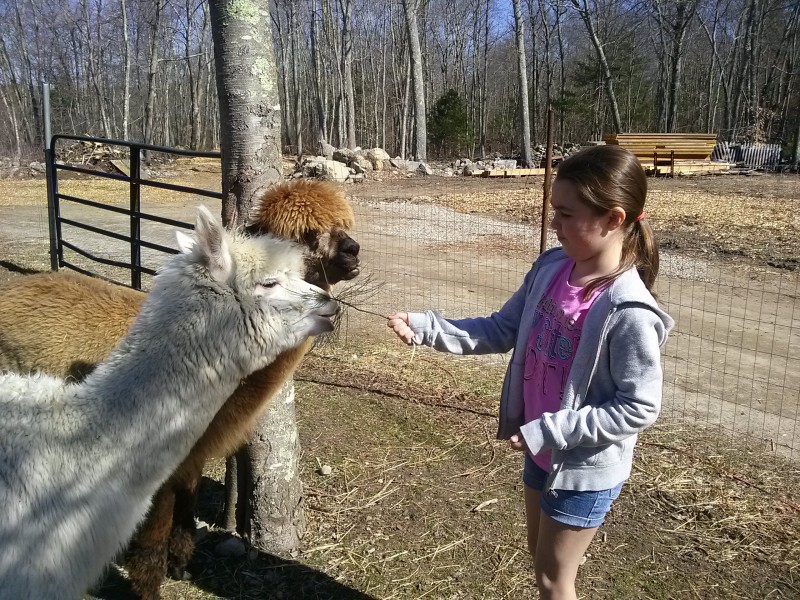 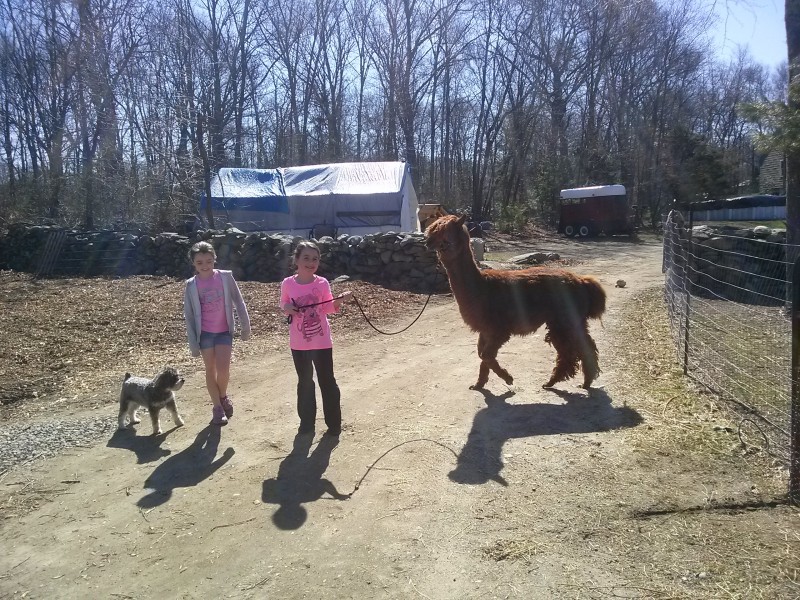 Two of our ‘girls’ went to Southeastern Regional Vocational Technical High School yesterday as part of Green Week.  Students were able to feed the alpaca and card some fiber.  Some nervous students giggled or squealed when the girls gently scooped grain from their open palms.  There were many questions asked about the care of alpacas and the products made from their fiber.  There were a few times that the CeCe and Mariah felt a bit stressed by the ‘pack’ of teenagers surrounding them. but they retreated to the safety of the trailer.  We hope that we were able to help educate the students about these creatures and how they give back to us with their unique fiber, their rich bean fertilizer and of course, their cuteness!

What a beautiful sunny Sunday!!   Farm owners know that Sundays are never truly a day of rest.  Alaurea, our 11 year old female, has a gentle spirit and does not mind being handled.  Her cria is due in July and she is beginning to show signs of being pregnant.  Did you know alpacas have an 11  1/2  month gestation period?   I was able to rub her tummy and actually felt movement!  It was also a nice day to pick up beans.  I never thought I’d be blogging about alpaca POOP!  Dave has started an area for bean composting and it is rich and ready to place in garden beds.   ‘BEANS’ are sold in 50 lb grain bags for $6.00 or can be bought in small nylon bags (perfect for making Bean Tea)  for $2.00.  Bean Tea (for plants only!) is made by soaking a nylon ‘Tea Bag’ in a gallon of water for several hours .  The ‘Tea’ is poured onto plants or mixed into the soil.   It’s the ultimate recycled recyclable!